Mining technology is rapidly evolving to meet the challenges of extracting minerals in remote locations, often with extremes of weather and often from ore bodies located deep underground. To achieve production costs that are competitive and sustainable, a number of new technologies are being adopted by major mining companies. These include increasing use of automation and the use of high powered, gearless drive conveyors for their transportation requirements.

To maximise the effectiveness of these technologies, the reliability of the equipment becomes critical to ensure target production costs and production outputs are achieved. For conveyor pulleys, this has necessitated the use of pulley lagging that can handle the increased loads applied by high-power drive systems, extremes of temperature from -50°C to +75°C, and in many cases operation in extremely wet and corrosive environments.

Traditionally, many pulleys have been lagged with cold vulcanised bonding systems which were convenient to use and did not require the use of specialised equipment – effectively convenience was given priority over performance.

For the past five years, Elastotec has collected data from our network of Approved Applicators on the modes of lagging failure that are seen on pulleys sent for refurbishment. Three of the most common modes of failure are:

It has been well documented that cold vulcanised bonding of pulley lagging increases the likelihood of premature lagging failure due to debonding from the pulley shell, edge lifting, and corrosion of the shell at the joints between lagging strips. In many cases, these types of failures, require relagging on the conveyor, resulting in loss of production. Because the conditions for lagging on the conveyor are less than ideal, these problems often reoccur.

Three of the most common causes of failure with cold vulcanised bonding are:

1. Debonding of lagging from the pulley shell

Debonding from the pulley shell is a catastrophic failure that occurs most commonly on drive and high-tension bend pulleys; when the force applied to the lagging exceeds the adhesion strength of the bond between the lagging and the pulley shell. A common standard for cold vulcanised bonding is an adhesion of 9 N/mm – ideal conditions in factory application, with everything done correctly can provide adhesion from 9 to 15 N/mm. However, when lagging is cold vulcanised without OEM application procedures, or in poor conditions (on the conveyor), in many cases adhesion is below the standard of 9 N/mm. 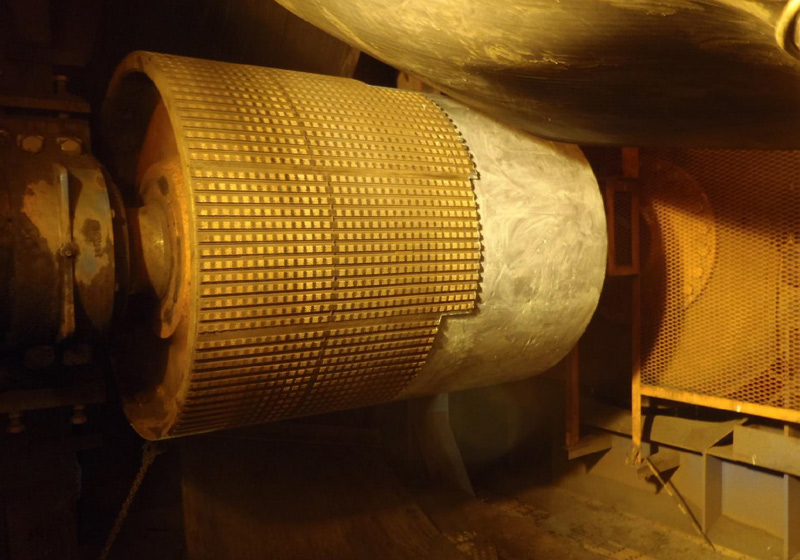 Photo #1. Large Drive pulley with cold vulcanised ceramic lagging that has debonded from the pulley shell under load.

This type of debonding can also occur on non-drive pulleys – in particular high-tension bend pulleys. In many of these cases, the debonding that occurs is localised and not uniform across the
pulley face.

A number of factors combine to magnify the chance of a debonding failure – these include:

Photos #2 and #3 show a pulley with cold vulcanised lagging that failed shortly after installation in operating conditions at -35°C. Note the raised rubber pips on the surface of the pulley are still intact and have not had time to be worn away.

Photos #2 and 3. Cold vulcanised lagging failure due to debonding under load at low temperature.

Many lagging applicators using the cold vulcanised application technique for applying pulley lagging do not measure the adhesion strength obtained on each pulley, and so have no idea as to the level of adhesion being achieved on each installation.

Photo #7 shows a common method of removing cold vulcanised lagging from the pulley shell by applying a load to the lagging at 90 degrees to the pulley.

For Elastotec Hot Vulcanised Ceramic Lagging, the bond is so strong that if this technique is tried the pulley can be lifted by the lagging or the lagging will tear – there is no debonding from the pulley shell.

With 100% rubber tear adhesion, debonding of the lagging from the pulley shell does not occur. Elastotec currently has more than 500 pulleys in the field with this bonding system, with a number of installations on conveyors running high-power gearless drives (up to 4,400 kW) and to date there have been no debonding failures. 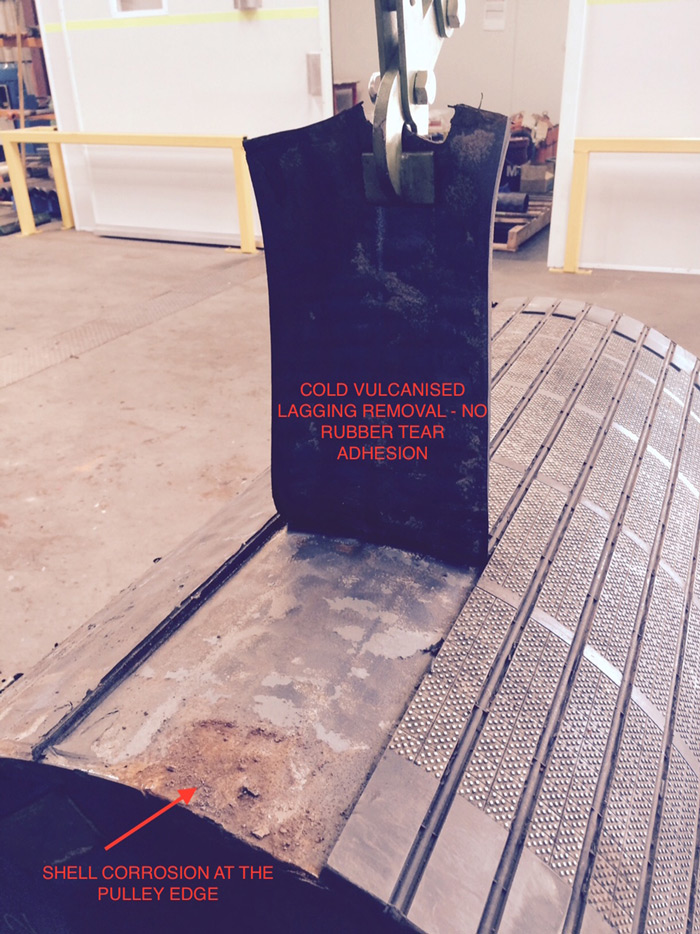 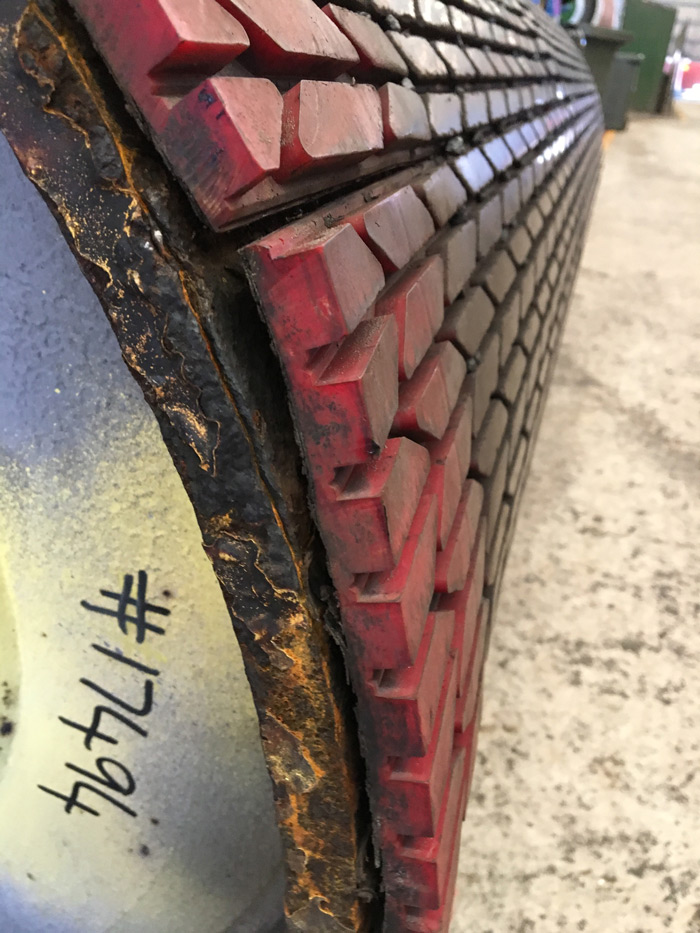 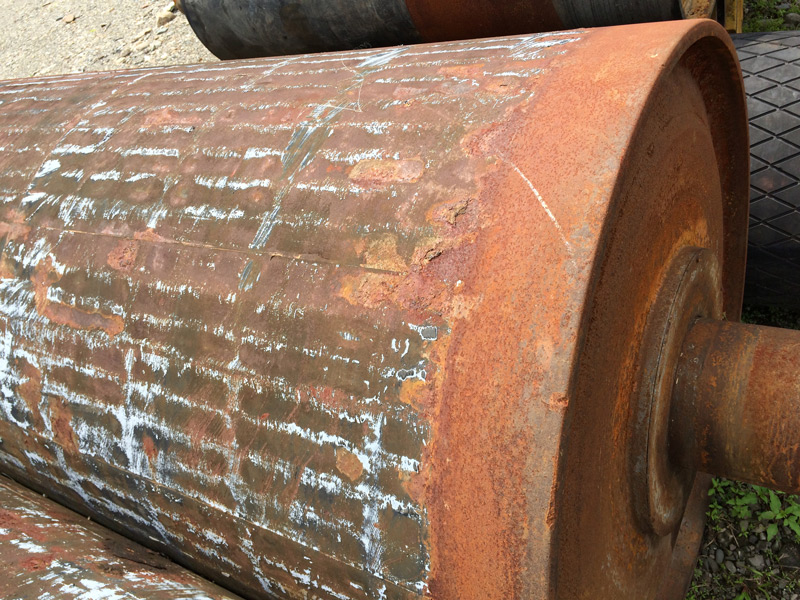 Photo #11 gives an indication of one of the mechanisms for this failure. The light grey pattern is where a layer of adhesive remains on the pulley shell after the lagging has been removed. This corresponds to recesses in the lagging profile. The areas that have no adhesive are the raised sections of the lagging which have been hammered down during the cold vulcanising application process.

Photo #12 and #13. Severe lagging damage due to edge lifting and belt tracking.

Photos #14 and #15 below show the results of operation at the same mine site of a pulley lagged with cold vulcanised ceramic lagging and one lagged with Elastotec Hot Vulcanised Ceramic Lagging. Both pulleys were installed at a large copper mine and operated in wet conditions where the water was acidic. There is corrosion evident on the end discs and locking elements of both pulleys. On the pulley with the cold vulcanised lagging there is severe edge lifting failure. The pulley with the Elastotec Hot Vulcanised Ceramic Lagging shows no sign of edge lifting and the lagging remains fully serviceable. 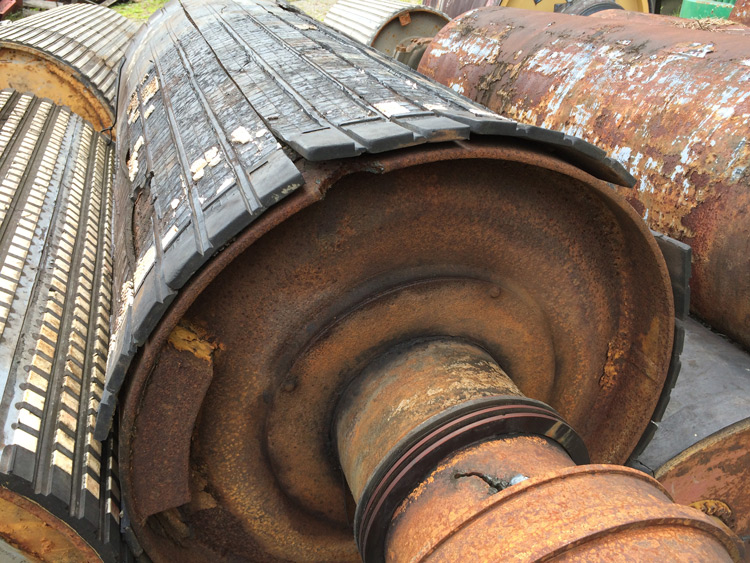 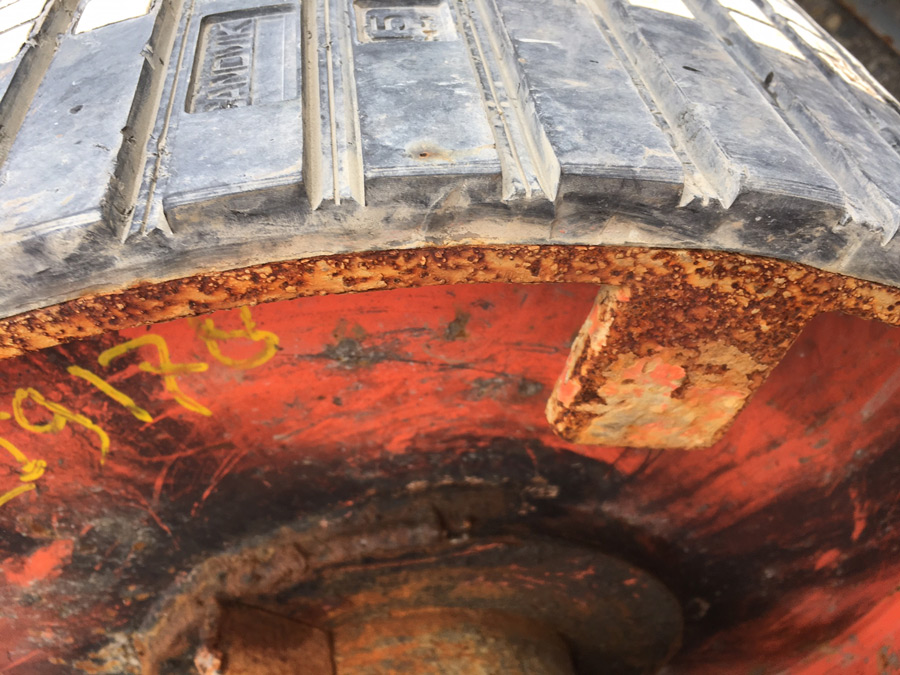 Photo #16 and Photo #17. Corrosion and lagging debonding at joints between cold vulcanised lagging strips due to water penetration.

The joints between lagging strips are another weak point that regularly lead to lagging failure. There are two main contributors to joint failure with cold vulcanised lagging application:

With regard to application techniques and workmanship, many lagging applicators use a technique called “butt” lagging where each lagging strip is ‘butted’ up against the previous strip. Depending on the skill and care of the operator, the result can vary from having no gap between strips to having a gap several millimetres wide (see photo #18). It is common for lagging applicators to use liquid sealants such as ‘Sikaflex’ to fill in gaps at the joins – the use of sealants to fill gaps will ensure lagging failure in wet conditions. 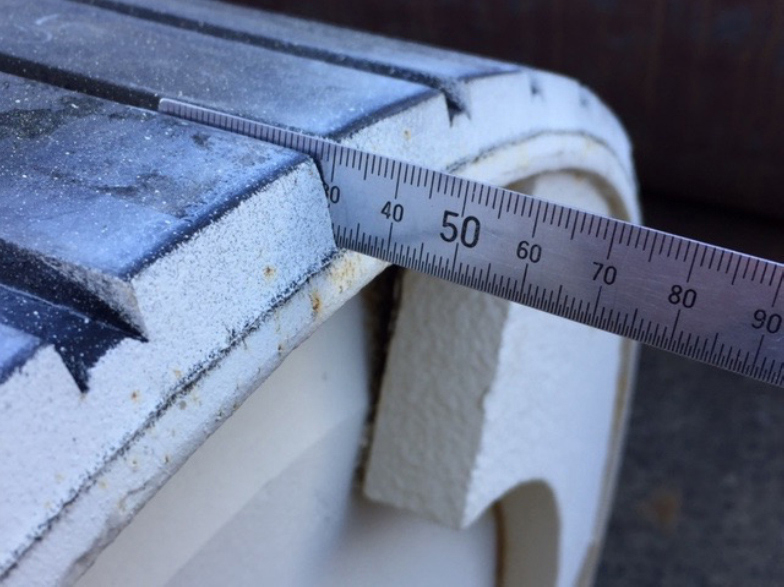 Even when the ‘butt’ application method is done perfectly, the sealing of the joint relies entirely on the cold vulcanised adhesive. When this method is used on pulleys with a ‘crown’, the lagging is stretched into place to close up the join. The resultant join has the lagging under tension with the lagging strips trying to pull away from one another. Eventually these joins will open up, allowing water to reach the pulley shell and corrosion to begin.

When we look at forces applied to the lagging joints by the belt during operation, we see that the belt applies a load to the lagging – the highest loads occur on drive pulleys and on high-tension bend pulleys. (See Fig#1.)

As the belt comes onto the pulley, these loads act in a way that wants to open up the joins between lagging strips. When the pulley is operating in a wet environment, this opening of the join, coupled with the hydraulic force generated by water caught between the belt and the pulley lagging, results in water reaching the pulley shell and causing corrosion. Eventually this corrosion leads to the debonding of the lagging along the joints – see photos #16 and #17.

For the corrosion failure at the joints between lagging strips, this can also result in additional, unnecessary expense when the depth of the corrosion reduces the shell thickness below what is required for the designed operating loads, and the pulley has to be scrapped.
See photo #19 and 20. 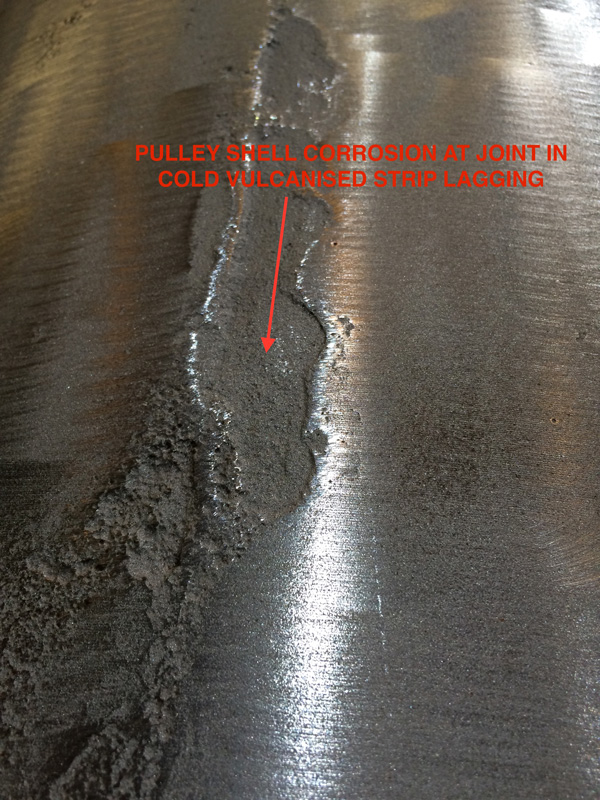 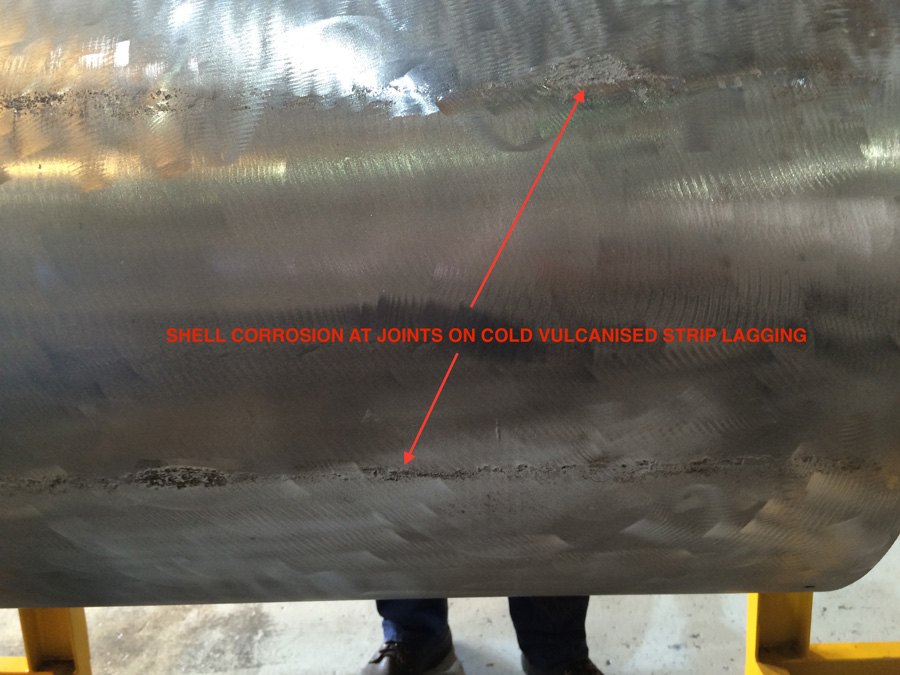 Photo #20. Pulley shell pitting from corrosion due to water ingress between lagging strips.

When Elastotec Hot Vulcanised Ceramic Lagging is applied to the pulley shell, there are no joints between the strips as the unvulcanised bonding layer along the edge of each strip fuses together to form a continuous lagging sheet, with no weak points between strips.
See Photos #21 and #22.

Elastotec Hot Vulcanised Lagging eliminates the chance of lagging failure at the joints between lagging strips.

Hot vulcanised join completely sealed from the lagging surface to the pulley shell – no chance of separation or water penetration.

To achieve reliable performance in all conditions, it is not sufficient to take lagging designed for cold vulcanised application and just apply an uncured bonding layer so that it can be hot vulcanised to the pulley. This is a compromise that carries significant risks.

In addition to having pulley lagging that is designed to eliminate or minimise the common lagging failure modes, the correct application techniques and checks are essential for the best result.

To facilitate this, Elastotec has developed detailed OEM Application Procedures for each different hot vulcanised lagging type. These procedures are focused on achieving the best possible lagging result. Included are detailed checklists for every part of the lagging application process, and culminate with a lagging adhesion test on every pulley.

The application of Elastotec Hot Vulcanised lagging is only done by Approved Applicators that have been trained by Elastotec. This allows the finished pulley lagging to be warranted by Elastotec – warranty details are available on request.

With a focus on providing the ‘longest service life’ possible for our lagging, Elastotec recommends the following: