In November 2017 a major iron ore port facility in the Pilbara decided to replace the ceramic lagging on a high tension bend pulley – the ceramic lagging had suffered physical damage on one edge that had exposed the pulley shell (Photo#1). With a capacity of around 180 million tonnes/annum of iron ore the port operates 24/7 year round and so reliability of the conveyor system is critical to achieving the maximum ore through put.

At the time hot cast polyurethane lagging was specified for all non drive pulleys by the port operator. The lagging specification had recently been revised to nominate polyurethane lagging in place of the previously used Direct Bond Ceramic Lagging (DBCL) because of its ability to resist build up. Build up from carry back has been a problem on ceramic lagged non drive pulleys in the Pilbara, and has caused belt tracking problems, and damage to belt and belt splices. This high tension bend pulley is the #3 pulley in Fig#1 below.

The Elastotec 20 mm Plain Polyurethane (PU) lagging can be manufactured with bonding layers suitable for cold bonding or hot vulcanised application. The specified hot cast polyurethane requires that the pulley be removed from the conveyor and sent to a suitable applicator. As this pulley had to have the lagging replaced in-situ it was not possible to apply hot cast PU lagging and the Elastotec cold bonded PU lagging was chosen as an alternative. 20 mm PU thickness was chosen to provide a service life in excess of the existing mechanical components (bearings and locking elements). 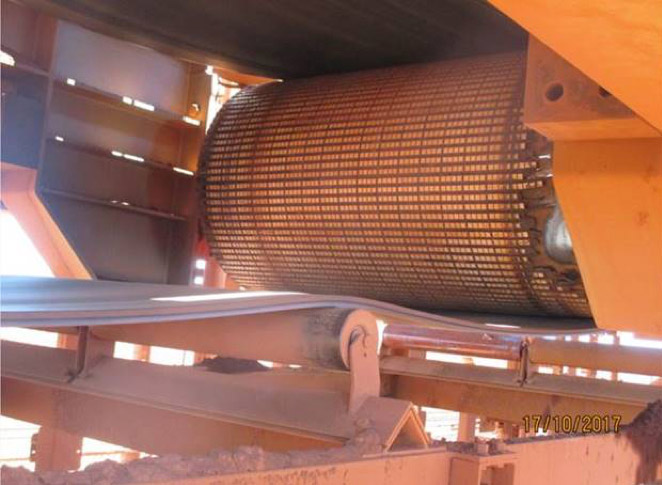 Photo #1: Ceramic lagging with physical damage along one edge.

In December 2017 during a planned shut the damaged ceramic lagging was removed and replaced with the Elastotec 20 mm Plain Polyurethane lagging (see photos 2 & 3). The lagging on this pulley has been operating trouble free since December 2017. Elastotec believe that rubber backed Polyurethane lagging can successfully be used as an alternative to hot cast Polyurethane, providing comparable service life and with the added advantage of being suitable for on conveyor replacement of damaged or worn lagging. Hot vulcanised application of the Elastotec PU Lagging is always preferred as it ensures 100% rubber tear bonding and no joints, however like hot cast PU lagging the pulley must be removed from the conveyor for this type of application. 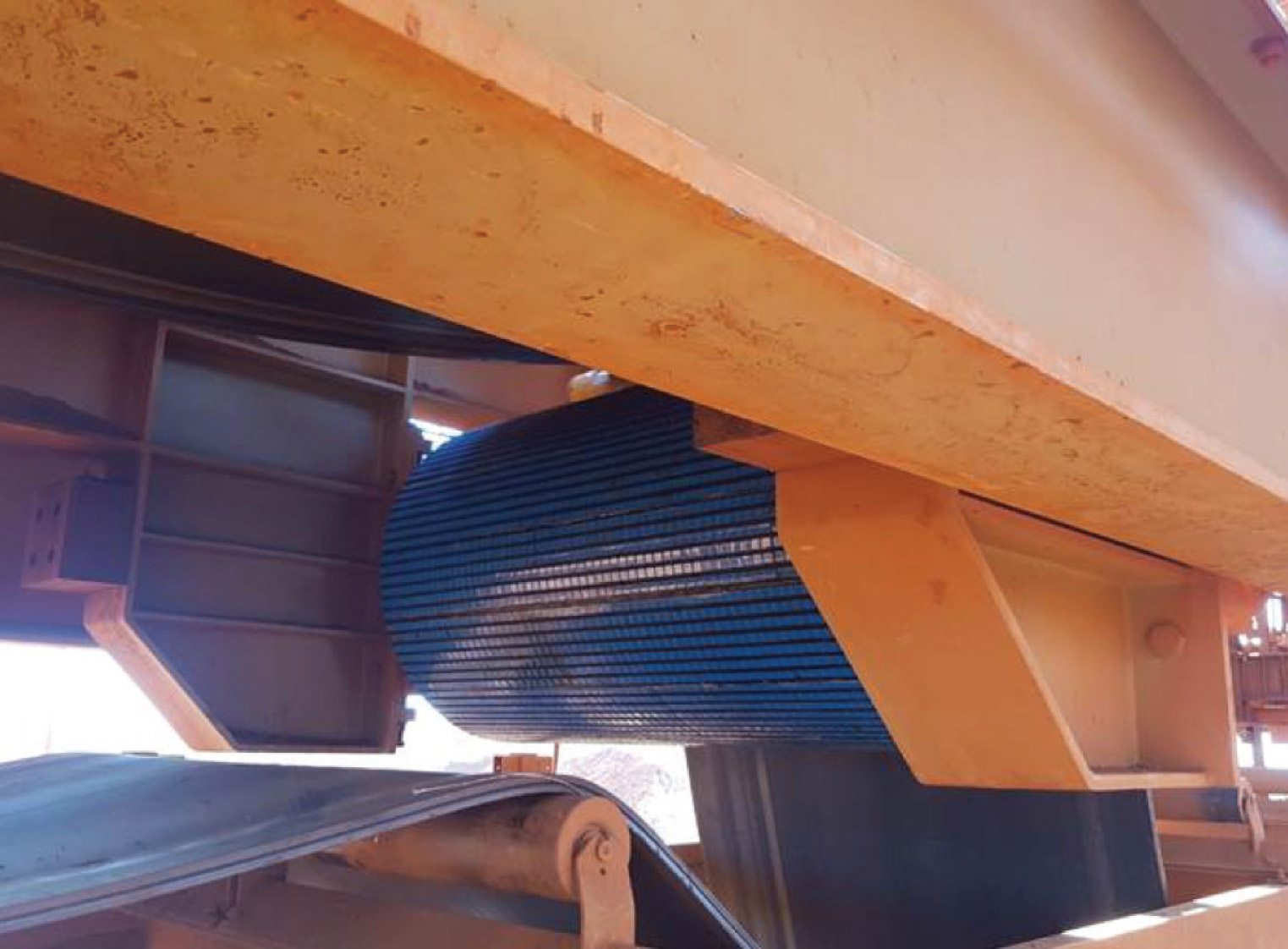 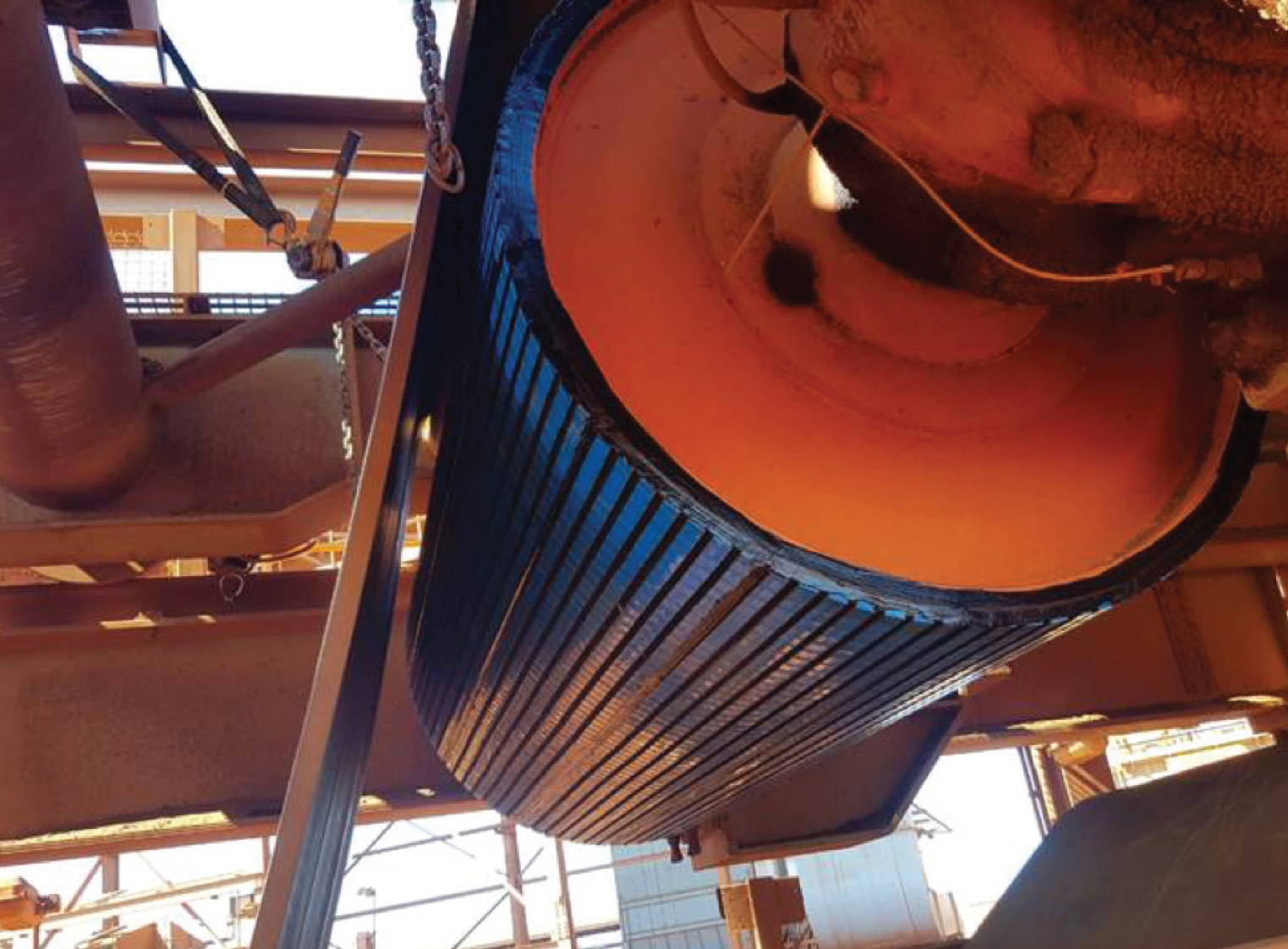